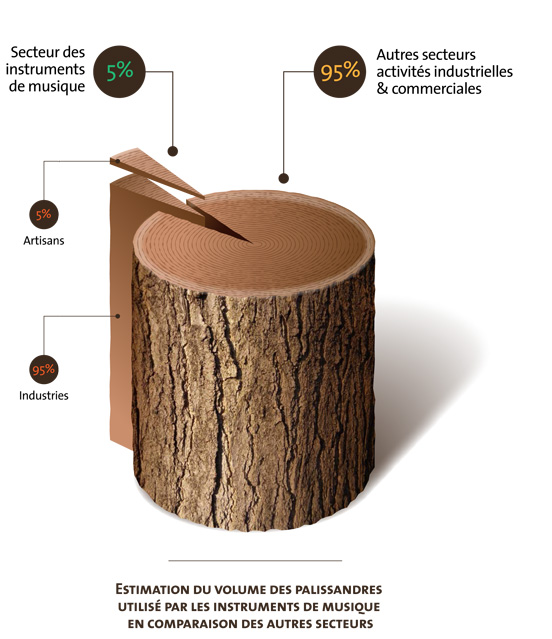 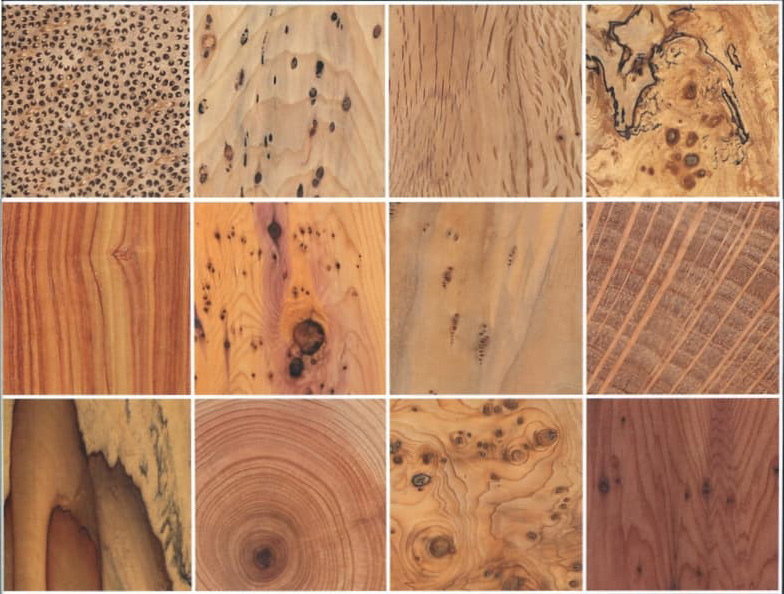 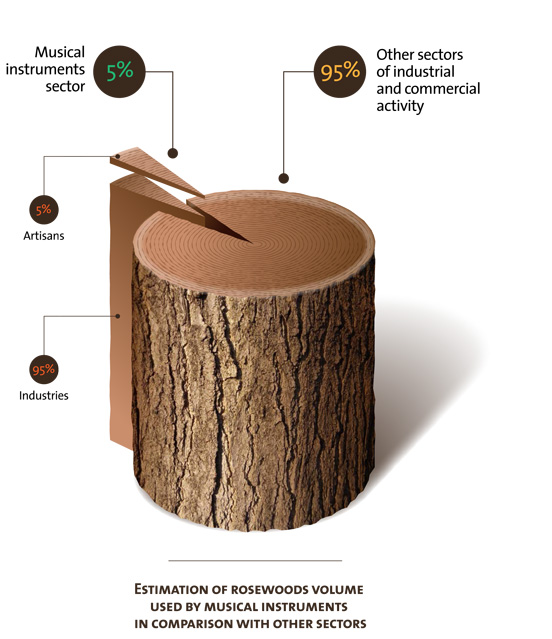 Musical instruments are hit hard by human frenzy that is to draw all the natural resources of our planet without the good sense to renew them!

The report is real and very disturbing, we have reached the stage where  the wood resource used to make musical instruments decreases every year and irreversibly for some species that are mainly and massively used by other branches of activity such as the furniture.

The musical instruments become a real collateral damage as they use a tiny part of the cut and exported woods. The guitar is particularly impacted because the wood is its main raw material. The diversity of species used has been an integral part of its history for over a century and a half.

Regulations such as CITES, which control the international trade in endangered species of fauna and flora, tend to protect more and more species. But the economic mechanism of replacing a protected species with a similar one that is unregulated, accelerates the process of depleting the resource with the risk that it will quickly become banned from any trade.

The use of  local woods for guitar luthiers, as an alternative for example, is a challenge in itself because of  the industrialization of wood, with the disappearance of slow-growing species in favor of rapid growth ones. Add to this that French woodwork and some of lutherie woods are mainly found in export to return to France in the form of finished products, leaving the luthier an existing stock it will become difficult to renew.

The situation is therefore more than alarming and we must take action to help preserve this natural resource  so important for the future of our art craft and our instruments.

It is for all these reasons that the professional association of guitar luthiers in France (APLG), associated with the scientific exploratory project "rosewoods" carried by Iris Brémaud, researcher at the LMGC (CNRS), specialized since twenty years in instrumental woods, in collaboration with four other scientists including Patrick Langbour, researcher at BioWooEB du CIRAD, in charge of a xylotheque of 8400 species of wood and with researchers from universities in Mexico and Madagascar.

This project aims to overcome the lack of data on the physical properties of rosewood species threatened by industrial overexploitation. It will be the first essential step to contribute to the joint conservation of biodiversity and socio-cultural heritage.

Note: The other woods used by luthiers will also be studied in this project.

The investigation of the project "Rosewoods" in two words

This survey will be conducted in three phases with a deadline of November 2020:

1. Collect from luthiers guitar wood samples that will be studied in the laboratory

a. The woods: rosewoods but also all other lutherie woods (piece of wood and a shaped sample)

b. A documentation sheet to be completed by the luthier with the usage information for each species collected.

2. Survey - in the form of an interview

For this second phase, Iris Brémaud will visit some luthier workshops to conduct  in-depth interview  to make an inventory of the use of rosewoods and other woods.

After laboratory analyzes and study of the data collected, all these results will then be available in a open database on the internet.

LUTHIERS IN FRANCE, EUROPE AND INTERNATIONAL

At first, only the APLG luthiers members were contacted in early June 2019 From the month of July 2019, all French luthiers will also be contacted to take part in the project. European and international luthiers will then be invited to participate from September. Take stock of the state of lutherie’s wood

At the same time as this scientific project, APLG will carry out research on the conservation status and regulation of each studied species and beyond, of all the species used in guitar, in order to draw up a precise inventory of the situation of the woods used in guitar and spread it as widely as possible with the aim of informing and raising awareness.